Situated on the Santa Rosa Island of the Escambia County in Florida, the Pensacola Beach is a fantastic destination surrounded by the Gulf of Mexico, Santa Rosa Sound and Pensacola Bay, and the Gulf Islands National Seashore. It is one of the most famous resorts in the nation. More than amusement parks and rides, this coastal town offers historic and natural attractions. This deep water harbor marked the beginning of a lengthy enmity for rule against France and Great Britain. These people along with the former Spanish migrants have left behind much of their heritage in form of Spanish brickwork, French wrought-iron balconies, and Victorian mansions and museums. 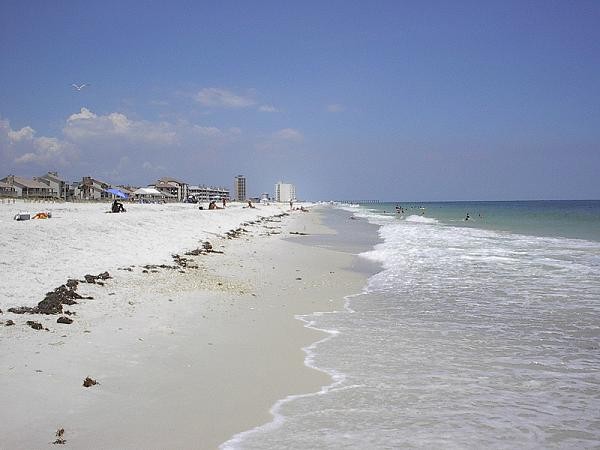 Among the major highlights, the Quietwater Beach Boardwalk on the Santa Rosa Sound side across from the Casino Beach is an all-inclusive paradise. Spend time in its retail shops, restaurants, street musicians, and sidewalk artists. Further, there is a big sea shell stage to host concerts frequently throughout the year. At its rear, you can opt to be in the serene atmosphere wherein you can hear only the sounds of seagulls and children busy in forming castles out of sand. One more highlight is that it is the spot of many festivals such as the Bushwacker Fest and the Independence Day fireworks.

My next choice from the attractions in the Pensacola beach was the Fort Pickens – rated as the best in Florida by Fodor’s. We reached here via the road that was restored after being damaged by Hurricane Ivan. Its construction was over in 1834 whose look and feel has changed much since then. Prominently utilized until the World War II, it is now offering an auditorium, a museum, and a visitors’ centre. Being on a self-guided tour, I explored the plaster-lined rooms that were once officers’ quarters and dungeon for the Apache prisoners. It was here that the renowned dweller, Geronimo, lived in the rooms alongside the south wall, now seen in the crumbled state. The boundary of seven miles offers campgrounds, nature trails, and seemingly unending protected beaches ideal for shell hunting and for picking via flotsam ashore. As such much visitor facilities have to be developed here. Even the campground utilities such as electric and water stations are to be made available.

Next is a visit to some of the famous Novelty Houses. Among them, the most popular one is the house with a UFO-shaped Futuro acting as the second storey. This novelty house is also known as the ‘Spaceship House.’ One more highlight is the Dome of a Home that is a home in shape of a big dome so made to overcome the hurricane winds and storms.

Then, we went to see the only two churches on the beach. First is the Pensacola Beach Community Church allied with the United Church of Christ. The second one is the Our Lady of the Assumption Catholic Church that is a mission church of St. Ann’s Catholic Church in Gulf Breeze of Florida. The Seville Historic District where one can explore the beach’s heritage offering gems like the Florida’s oldest church and a remarkable Historical Museum with abundant alluring historical facts.

After exploring its history, churches, and houses, now it was the time to explore its renowned current stars, the Blue Angels precision flying team of the US Navy, who reside on this island and offer exciting exhibitions. The US Naval Air Station is to the west that also holds the National Museum of Naval Aviation.

Lastly, we had some refreshing time on its white sandy beaches on the Pensacola Beach dotted with luxury resorts. While you can surf and swim in its emerald waters, you need to be quite alert from the tides, currents, and washouts.

Here are some tips:

Never swim alone
Ensure that you are a good swimmer.
Swim in the area where there are lifeguards.
Avoid panic and swim parallel to the beach in case you are trapped in a washout until you are able to swim without struggling.
Watch out for the surf warning flags. A green flag indicates calm waters, while a yellow flag signals rough surf. If red flags are flying, do not swim. In case, you do not see any flag, do not surf.
Avoid being at the beach during electrical storms or lightning.
Have abundant of sunscreen and drink a lot of water.
Ensure the suitability of the water depth prior to diving.
Avoid having glass objects or dogs on the beach.