Also known as the Will Rogers highway, the Main Street of America, and the Mother Road; the U.S. Route 66 was once a long highway stretching many regions. It covered Chicago, Illinois, Missouri, Kansas, Oklahoma, Texas, New Mexico, Arizona, and California followed by it end at Los Angeles. This made it a 2,448 miles route. Now, it is no longer a part of the highway. The sections of the road passing via Illinois, Missouri, New Mexico, and Arizona are regarded as a National Scenic Byway and are so designated as the Historic Route 66. On the other hand, some parts of it in southern California are named State Route 66.

Irrespective of this, the lengthy road is worth a journey due to its many attractions. The route 66 attractions are really awesome that satisfy your tiring long drive. 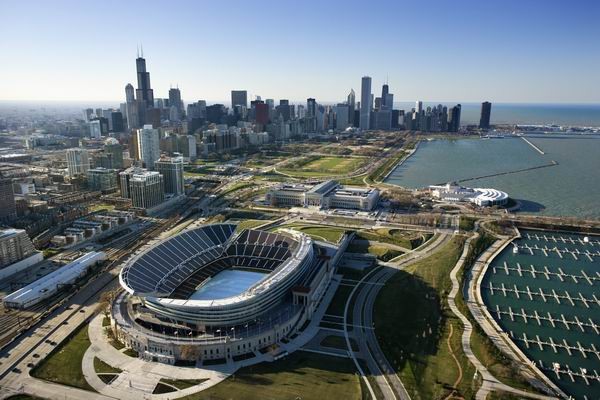 To explore the route 66 attractions, I started from Chicago and first came across the Sears Tower of 1974 that holds 110 storeys. It was the tallest structure when its construction was over overcoming the World Trade Center Towers. Renamed as the Willis Tower, it is now no longer in that rank as the Petronas Towers in Malaysia now overtakes it. Next, the Chain of Rocks Bridge over the Mississippi River was a very famous landmark popular for its bend over the midway. However, it is so narrow that two semis cannot face each other. Today, people can walk on this bridge during the day, but no vehicles are allowed here. The old water intakes serving the St. Louis waterworks are seen from here along with the Gateway Arch.

The arch is the part of the Jefferson National Memorial in St. Louis at Missouri. The memorial was built in 1965 for westward expansion. Beneath the arch is a free museum. Now, I came across the Meramec Caverns near Stanton, Missouri that has the entrance fee. Owed as ‘The Jesse James Hideout’, advertisements were made on the Route 66. Spend some time in its cool atmosphere. The Devil’s Elbow is the next highlight, which in Missouri, is a small settlement on the Big Piney River in the Ozark Mountains. Explore this area’s great scenery and the roadside view from a lookout onto the west of town.

The Shrine Mosque – the Abou Ben Adhem Shrine Mosque on the St. Louis Street in Springfield is astonishingly not an Islamic mosque, rather a mosque for Shriners – a Masonic organization. Listed in the National Register of Historic Places, the structure exhibits the 1920s Arabian architecture. Then, I headed towards the Schifferdecker Park on the west of the famous mining town of Joplin in Missouri wherein there is a mineral museum. It is really great to watch out for the several minerals.

Now moving towards Kansas, the Marsh Arch Bridge towards the west of Riverton is actually the final concrete arch bridge among the Route 66 attractions. It was currently repainted. In Texas, do visit the U-Drop Inn that is a gas station in Shamrock exhibiting some distinct built-up style. Then, the Devil’s Rope Museum in McLean is full of exhibition of barbed wire. A vast amount of barbed wire and tools to create it are really great discovering! Further, a small Route 66 collection including the poseable mannequins is also kept here. Next, the Leaning Water Tower is a famous landmark.

The Cadillac Ranch in the mid Texas Panhandle, west of Amarillo is where you explore the modern art. Ten Cadillacs are in the center of a cornfield, which are hardly seen empty. Now, it was the time to see the ghost town of Glenrio, Texas with very few inhabitants on the Texas-New Mexico route. However, there is no need to fear about. You can see the relics of the famous First/Last Motel in Texas.

The Blue Hole is a geological wonder – a deep blue water spring near Santa Rosa in New Mexico. It is perfect for scuba diving with admission from the dive center nearby (do carry the PADI or NAUI certificates. Then, the Pecos National Historical Park off the original route in New Mexico is where you can discover many cultural and archaeological sites. Many of them are related to the Santa Fe Trail, while some are concerned with the Civil War Battle of Glorieta Pass fought nearby. At the end of the Trail is the St. Francis Cathedral – a worth visiting religious centre. Kindly note that you can do so only when services are not going on and that do not bring flash camera.

Then, I visited the Coronado State Monument with a fee to the north of Albuquerque. Herein, there are some informational collections of an archaeological site that was dug out on a large scale in the early days of Route 66.

My last halt on Route 66 attractions was at the Frontier Restaurant where you can see many students at the University of New Mexico eating and studying.