Mexico City, or the Distrito Federal, is one of the oldest, largest, and most prosperous cities in the Americas. This city of stark contrasts has been the center of Mexican culture and history since the Aztecs arrived in the city. From its founding, Mexico City has been a city of warriors, conquerors, rebels, and revolutionaries.

The Aztec god Huitzilopochtli sent his wandering subjects in search of a promised land. They sought an eagle with a serpent in its mouth perched on a cactus. The wandering tribe encountered this sign around a series of lakes in south central Mexico. This was the site of Tenochtitlan, the capital city of the Aztec empire.

The Aztecs built intricate temples to their gods, created a series of canals to navigate the lakes, and built homes for their people. Using a type of feudal labor, Moctezuma built his elaborate palaces and homes where gold was a common adornment. 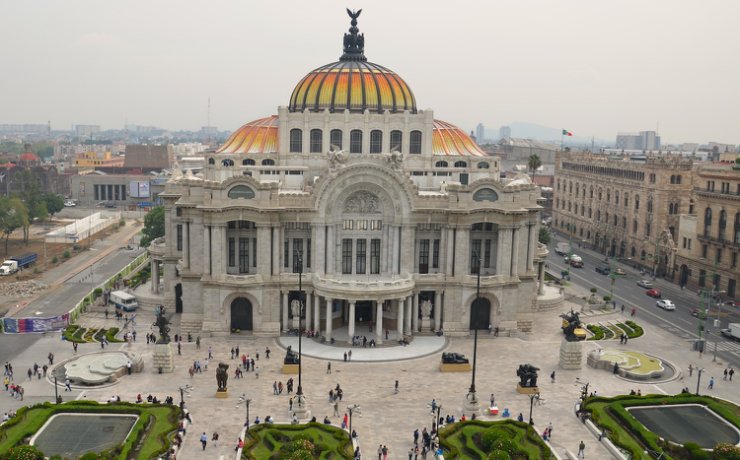 When Hernan Cortes and the Spanish arrived in Mexico, they compared the capital of the Aztec empire to the advanced cities of Europe. Cortes himself compared Tenochtitlan to a Venice of the New World with its canals and architecture. More than one million Aztecs lived in the city when Cortes arrived. The fall of this city to the Spanish allowed Spain to get a foothold in the New World.

Spain made Tenochtitlan the capital of New Spain, and began converting the city from its pagan past of human sacrifices to the center of the Catholic religion. The Spanish relied on the strong infrastructure of the city to make it a thriving urban center.

Mexico City saw the strife of the rest of the nation during the ten years of war for independence from Spain. During the U.S. – Mexican War, the U.S. Army laid siege to the capital and occupied it for a period of time following the war.

Modern Mexico City, or the Distrito Federal, bears many traces of its rich history. The city has many famous museums dedicated to different eras of its past. The city is also home to the shrine of Our Lady of Guadalupe where millions of devout Catholics take a pilgrimage every December 12.

Mexico City is currently one of the largest cities in the world. It’s mix of people and cultures make it an important city of business, arts, and politics. With proper leadership, this city will continue its important role in these areas.