With a towering 979 m height and the single free-fall cascade of 810 m, the Angel Falls is aptly regarded as the tallest waterfall on the planet. This waterfall adorns the Canaima National Park – a World Heritage site in the Bolivar’s Gran Sabana area in Venezuela. Stunningly plunging from the border of the table-top Auyantepui Mountain, the falls is right named ‘Angel’ as the term in the Pemon as well as other local languages mean the ‘fall from the uppermost point’ or the ‘waterfall of the most deep site’. Did you know that the height of the Angel Falls is over 10 times more as compared to the Canada’s Niagara Falls?

However, as per one more theory that also seems to be true behind the name of the falls is that the name was derived from the U.S. pilot named Jimmy Angel, the one who saw the cascade. This adventurous bush leader was in search of a Gold ore, but as his plane got stuck on the mountain; he along with his three companions descended the mountain during which they spotted the falls and came back on the top in some 11 days. What you see today atop the mountain is just a copy; the genuine plane is protected in the Maracay’s Aviation Museum. 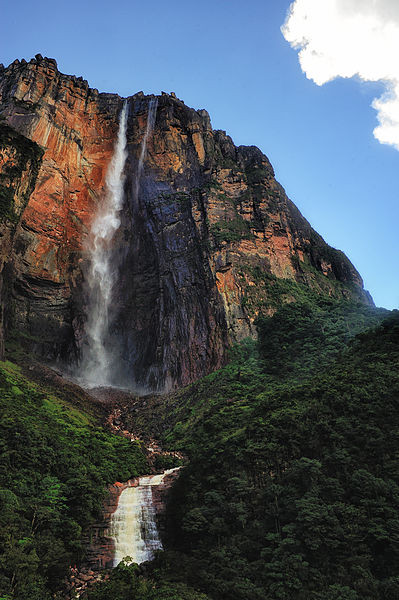 The height of the Angel Falls in the Guayana highlands is so high that before meeting the ground level, much of the water evaporates as steam or escapes as mist via the strong winds. Besides the plunge, the height also incorporates the leaning chutes as well as the 400-m rapids below the 30-m plunge and talus as the drop of the rapids. The base of the falls then intersects with the Rio Guaya also known called the Kerep River that finally meets the Churun River.

As the Angel Falls resides in the remote forest zone, your itinerary until the cascade is not going to be easy at all! But, your effort will reward you not only with the mind-blowing falls, but also with the fascinating features of the National park in Canaima. Along your way, admire the perfect mix of nature’s thrill as well as tranquility, majestic table top mountains, several rivers, forests, other waterfalls, stunning lagoons, and the savannas that are a green ocean along with the diverse set of flora and fauna. And above all, if you are interested in exploring the different cultures, then do meet the Pemon Indian natives that live here along with their peculiar craft, folklore, and cuisine. 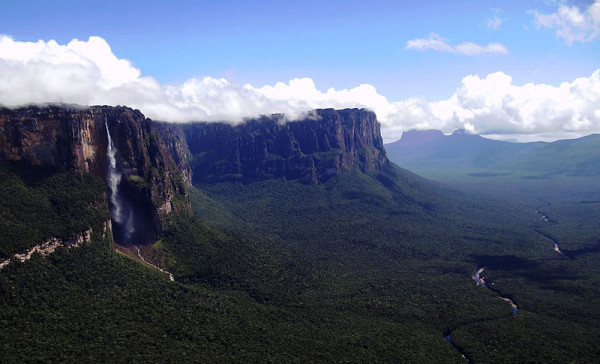 The national park, at the southwest end of Venezuela, is divided into eastern and western zones of which the latter is called Canaima that is accessible only by air. To reach here, commercial flights run from Ciudad Bolivar, Caracas, and Margarita. I am saying this as this area is the home of spectacular Angel Falls where you can also swim in the Canaima Lagoon edged by white dunes. Nearby is the world’s tallest temporary waterfall, La Catira. On the other hand, the Eastern area is accessible by both land and air.

From Ciudad Bolívar or Caracas, a flight drops one at the Canaima camp – the starting point of the trip to the falls’ base.

Trips run from June to December as the water is deep facilitating the sailing of the wooden curiaras operated by the Pemon escorts. Other months are not suitable, especially the dry ones, as the water flows less here.